This walking tour will be unforgettable. Because it leads through the historic centre of Vienna with its most famous sights as well as its most elegant shopping streets. 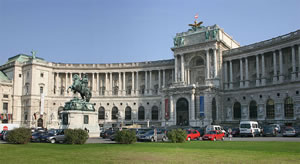 This walking tour will be unforgettable. Because it leads through the historic centre of Vienna with its most famous sights as well as its most elegant shopping streets.

Imperial Palace – Hofburg
We start with  a visit of the Hofburg complex which extends over 240.000 sqm, consists of 18 wings, 19 courtyards and 2.600 room in which nearly 5.000 people still work and live today. You will see: the Swiss Wing (which houses the Imperial Treasury where the regalia of the Holy Roman Empire and the Austrian Empire are kept), the Leopoldin Wing (with the office of the Austrian Federal President), the Stallburg (home of the famous Lipizzan stallions), the Spanish Riding School, the Austrian National Library and the St.Augustine’s Church (where the Habsburgs once got married). Then we stroll through the shopping streets like the Kohlmarkt, Graben (with the Trinity Column – one of the most beautiful baroque monuments) and Kärtnerstraße. These are the most expensive streets of Vienna with magnificent buildings and elegant shops. There is also the famous pastry shop Demel (formerly it was the official bakery of the emperor). na (a unique construction in Romanesque and Gothic style). The Imperial Crypt has been the principal place of entombment for members of the Habsburg dynasty in the middle of downtown.

Albertina and Vienna State Opera, Hotel Sacher.
Very close by is the Albertina, once the palace of the favourite daughter of Maria Theresa and now an art museum. It houses one of the largest and most important graphical collections in the world. (the most important masterpiece: “Young Hare” by Albrecht Dürer), the Vienna State Opera (Staatsoper) and the prestigious Hotel Sacher (where you can taste and buy the original Sacher Torte – the most famous cake in the world for more than 175 years)